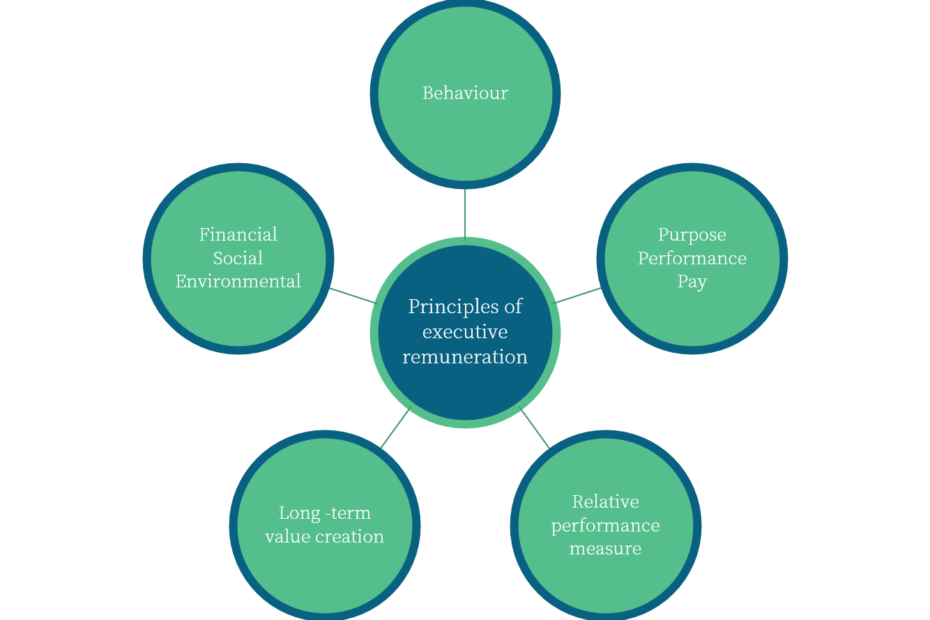 In the five principles of executive remuneration, we highlight key issues to be taken into account in designing, reviewing and assessing executive compensation policies and practices.

To decide the incentives of a corporation’s executives is to influence the firm’s behavior. Understanding executive behavior in response to remuneration policies is of vital importance. Reward Value is executing an experiment based on the Behavioral Agency Model (BAM) to analyze executives’ response to its remuneration model….

Fair remuneration rewards executives for corporate performance relative to the firm’s peers, independent of macro market fluctuations. The long-term incentive should reward the executive for sustainable value creation in excess of normal market returns and should not reward or punish executives for general market movements.

Our concept of ‘performance’ is essentially relative. We deem performance value creation in excess of value creation that would have happened anyway and/or under alternative decisions. Unfortunately, this alternative state of the world is unobserved, and we hence need to estimate it.

There are several ways of dealing with this problem. Companies with equity compensation relative to a peer group already employ one of them: relative performance evaluation. Performance is the share price change between two periods relative to the share price change of the peer. Thus, it is the excess stock return over a peer group. This is akin to what in the econometrics literature is known as a difference-in-difference analysis.

As a matter of principle, this technique is incredibly powerful. For executives, it provides a hedge against common shocks (they can still outperform their peers even in a declining market). For investors, it provides an incentive for executives to perform better than an alternative investment and it supports efficient risk-sharing.

Current implementations of relative performance evaluation, however, are suboptimal in at least three dimensions.

A firm’s  interests are best served by rewarding executives for long-term value creation, not short-term financial results. Given the much-needed long term orientation, the pay-out of the long-term incentive should be skewed (either fully or largely) to beyond the term of office of the executive. This liberates the executive from focusing on annual performance targets, avoids unsustainable behavior maximizing end-of-term value (i.e. pay), and allows the executive to capture the durability of his/her value creation.

Incentivising the long term requires a specific remuneration structure. In our view, short-term pay should be avoided. More generally, the compensation design should avoid ‘wrong’ incentives in terms of risk-taking or the timing of rewards (a ‘no harm’ principle for compensation design). Given the fact that annual vesting cycles reintroduce short-termism in executive behaviour, annual vesting should be avoided as well. Taken together, for appropriate remuneration design there are several ‘phases’ to be considered. The first phase is the pre-term phase. The executive has no influence over the strategic direction of the company in this phase. The second phase is the term phase. During these years, the executive develops and implements a long-term vision. Here, value creation is equivalent to sustainable long term value creation (SLTVC) above and beyond the counterfactual value that would have been generated in the absence of purposeful executive decisions. In the third phase, the SLTVC continues, but at some point, less and less of this post-term value creation is attributable to the old executive, and more and more to his/her successor (the fourth phase).

Based on this, the executive should be rewarded in proportion to SLTVC during phase 2 and 3, but with the final settlement of the reward at the end of phase 3 (i.e. after his/her post-term value creation has ended). Deferring final settlement until the end of phase 3 creates an incentive for the executive to be mindful of the long-term success of the company even after his/her term has ended.