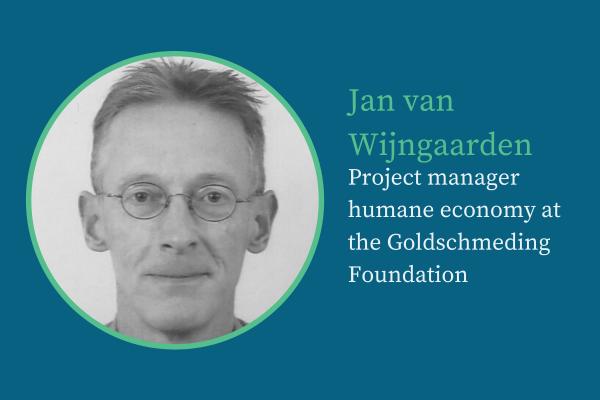 Meet Jan van Wijngaarden, Project manager within the Humane Economy program of the Goldschmeding Foundation. A now 61-year-old critical economist, also student of philosophy and humanistics. In his career, he has been particularly concerned with topics whose value does not easily find recognition in mainstream economics. For example, with environmental issues such as scarcity of raw materials and soil pollution, with the lack of market power of the consumer and with government policies to promote corporate social responsibility.

At the Goldschmeding Foundation, he is now focusing on changing the mainstream way of thinking about economics. Thinking from a different human perspective; from the rational, self-interested calculating homo economicus to the homo florens who flourishes in relationship with others. From an emphasis on financial values to multiple value creation; in light of his career so far, it will be obvious that this suits him well.

As project manager Humane Economy, he is the first point of contact for Reward Value in this respect.  We meet at least once a month to exchange views on the progress of the project and on what else we can do for each other. The Goldschmeding Foundation regards Reward Value as a partner in its pursuit of a better world.  We both focus on embedding the commitment to the interests of all stakeholders in the business operations of organizations. The Goldschmeding Foundation provides Reward Value with funding for the experiments on making executive compensation more sustainable within their project ‘Bestuurlijk Beloningskompas’.

“ If performance rewards work, and I assume they do, then they should be used in accordance with the social values endorsed by the companies.”

Fortunately, there are more and more companies that express their social responsibility and involvement in their mission, vision, strategy and annual report. In doing so, they show that they have a broader role to play than merely creating financial value for shareholders. The (often longer-term) interests of employees, in their own company and in the supply chain, of local residents and the broader community in which the company operates and – last but not least – of nature are also valued. In that light, it is strange that executives, insofar as they receive a performance bonus, are still often rewarded purely on the basis of short-term indicators of financial value creation for shareholders.

What is the effect of the incentives in the alternative remuneration models on the behavior of directors? What is the influence that different personality traits of directors and the contexts in which a board operates have on this? This also ties in with projects that the Goldschmeding Foundation supports in the context of Leadership. In these projects we focus, through training and education, on equipping current and future leaders with an ethic that has an eye for the interests of all those involved in the organization (multiple value creation). In the project Humane Governance of MVO Nederland in collaboration with Nyenrode University and the University for Humanistics, a group of directors and supervisors is exploring which insights, perspectives and tools can be supportive for for board room decision making aimed at long term wellbeing of all stakeholders of their organisations..

And finally, he is curious which companies want to participate in the in-company experiments with sustainable remuneration models.

“I think that in 5 years Reward Value can be a thought leader in Europe in the field of responsible rewarding. There is so much going on in this field and Reward Value has already built an impressive network in which it can share its expertise and mobilize those of others.”